Sipping a chilled bottle of smoked beer from Bamberg is a big distraction when trying to write an article. It’s so good it deserves my full attention yet I need to share its deliciousness with you. Much like drinking smoky bacon, it makes the perfect accompaniment to traditional German sausage, sauerkraut and mashed potato. Sadly it’s the last bottle I brought home with me from Bamberg, Germany, a picturesque historic town with over 2,000 buildings deemed UNESCO World Heritage worthy. It’s an easy day trip from Munich or Frankfurt.

Join me on a Bamberg walking tour taking in all the UNESCO highlights (and a glass or two of smoked beer!).

You’ll find a map of the route at the end of this article as well as downloadable Bamberg walking tour from GPSmyCity. 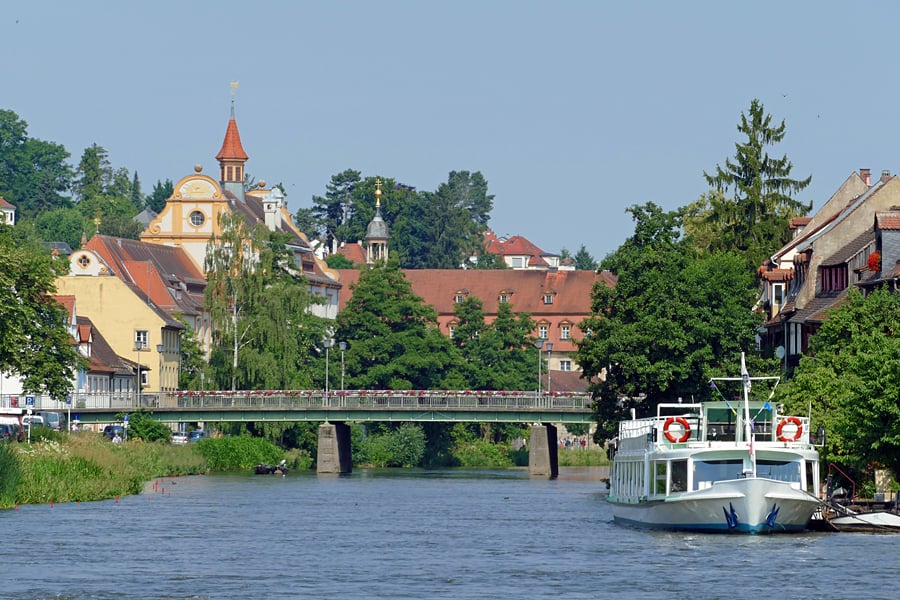 I stepped off the coach on a sunny morning in July and immediately fell for Bamberg. It would be worth visiting this pretty Franconian town for the beer alone but there are plenty of other reasons, in particular, the numerous beautiful buildings with UNESCO World Heritage status. Despite it being the height of summer while busy, it’s not overcrowded. 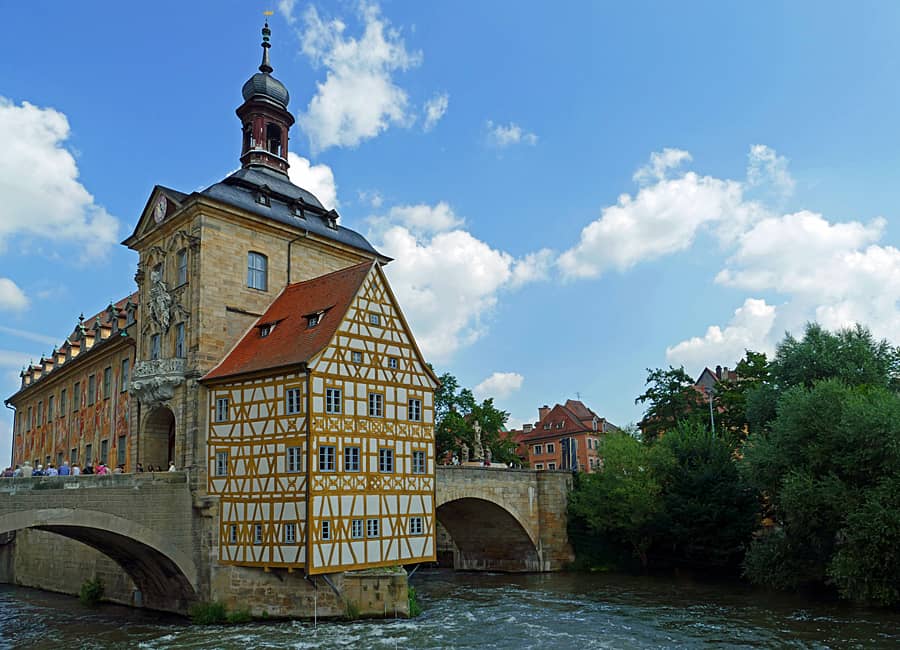 Photography Tip: A good photographic viewpoint of the town hall is from the bridge immediately south, Geuersworthsteg.

Many years ago (or should that be once upon a time) the citizens of Bamberg could not agree where to build their town hall. The gentry wanted it built on their side of the river while the poor folk living on the opposite bank wanted it built there. By way of compromise, having first built an island to stand it on, they built it in the middle of the river. And everyone lived happily ever after.

Another story tells a different tale. Once upon a time the Bishop of Bamberg refused to give the people land to build their town hall. Being a determined bunch they did not let that stop them. They created an island in the river that flowed through the middle of the town and built their beloved town hall. Problem sorted.

Either way, the Old Town Hall sitting proudly in the river is an impressive building with three-dimensional trompe d’oeil frescoes on its facades. The original town hall, built in the 14th century, was reconstructed after a catastrophic fire in 1440. In the mid 18th century it was redesigned by Michael Küchel which is how we see it today. Gazing at it I could almost believe I’d drifted into a tale by the brothers Grimm.

Check prices and availability for hotels in Bamberg, Germany.

Along Dominikanerstraße the original Schlenkerla brewery tavern, with its dark green shutters, serves the famous Aecht Schlenkerla Rauchbier (Original Schlenkerla Smoked Beer) tapped directly from wooden barrels in the traditional manner. The brewery is known to be over 600 years old and this tavern is the only place in town serving the smoked beer from the barrels. Its the perfect place to stop for a drink and a bite to eat although it does get very busy. Many other restaurants and shops around the town also sell the beer but for the authentic taste go to Schlenkerla. You’ll also find a small shop inside selling bottles to take away and a beer garden out the back. 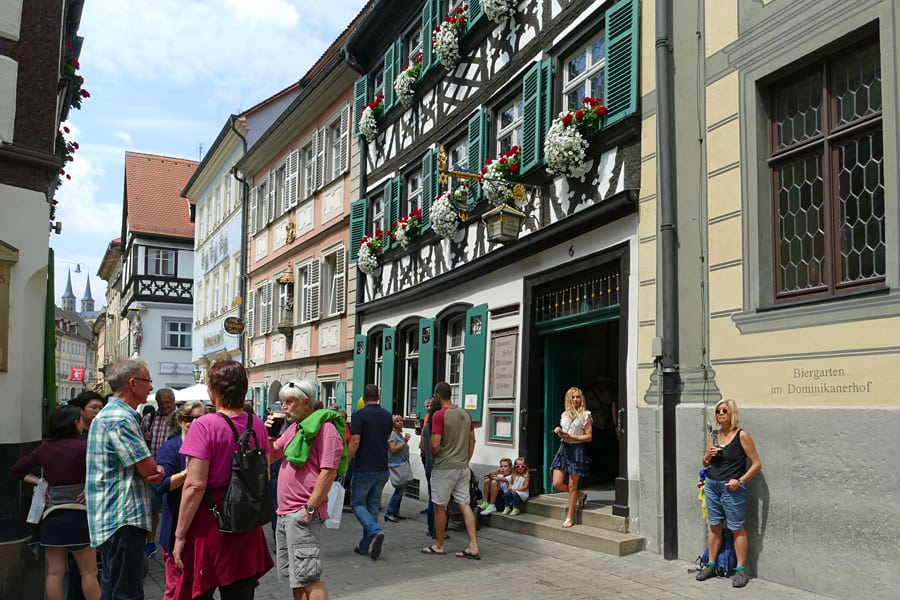 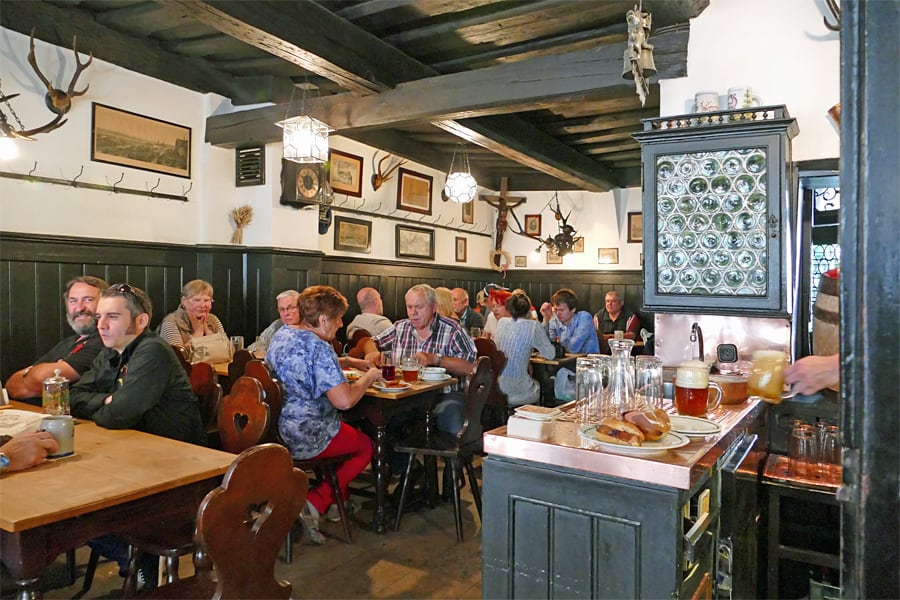 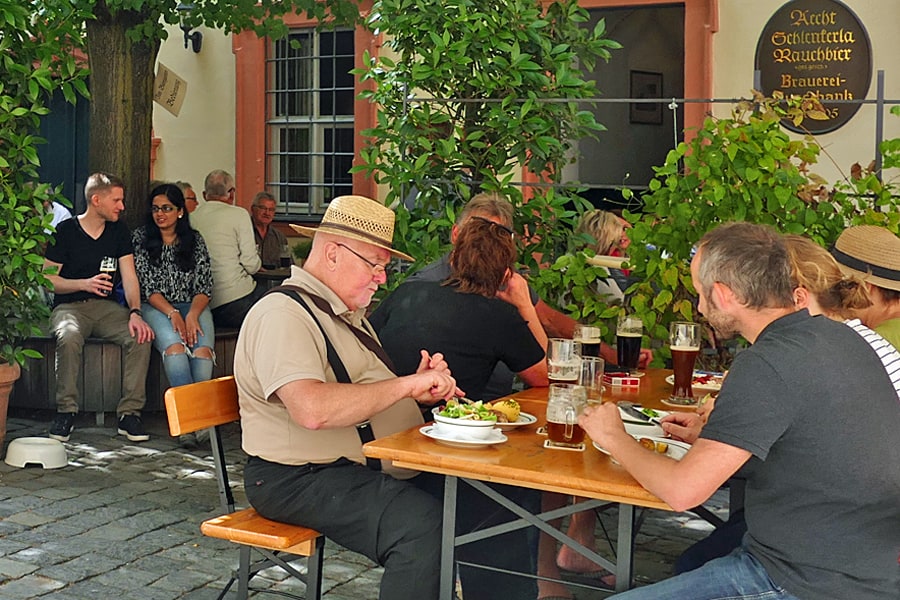 This article is now available to download for free on GPSmyCity. It can also be upgraded to include an offline map and GPS guided travel routes. Follow this link on your mobile or android device to find out more, Walking Tours in Bamberg.

From here turn left into Katzenberg, up a flight of steps that will bring you to Domplatz and the 13th century Bamberg Cathedral (Bamberger Dom St. Peter und St. Georg). In the same square, the Alte Hofhaltung or Old Court complex is made up of the 15th-century palace and outbuildings of Henry II. 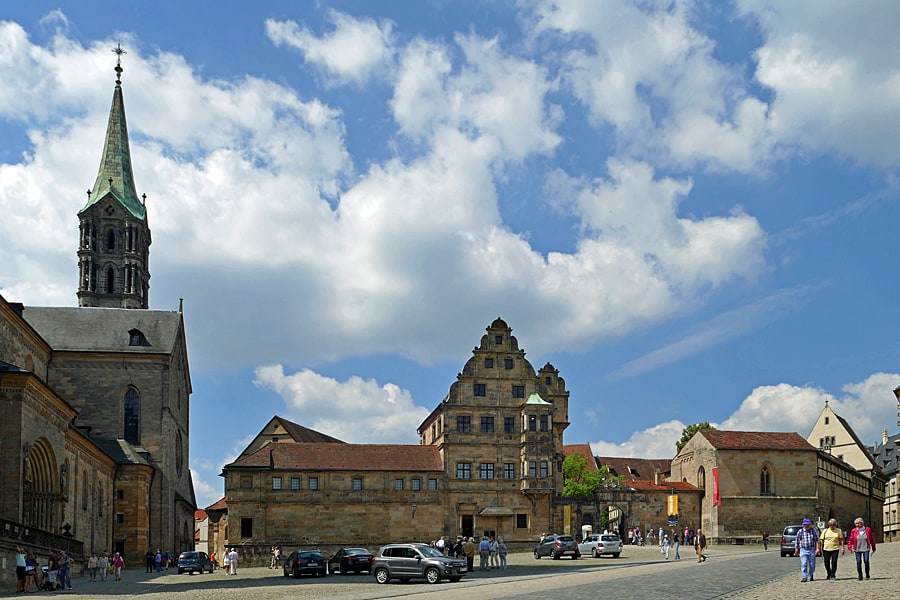 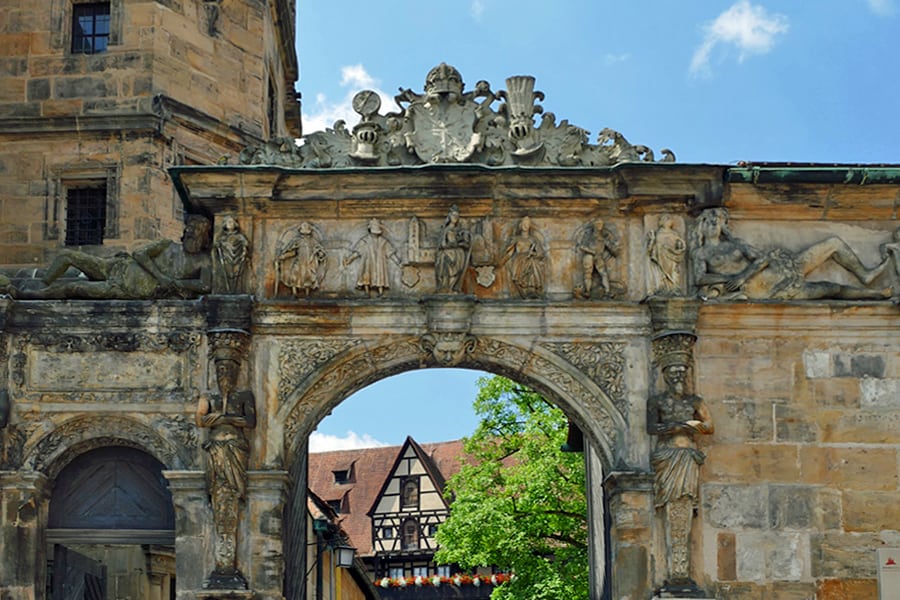 The Rose Garden of Bamberg, Germany

Still in Domplatz, opposite the Cathedral is the 17th century New Residence. The smell as you enter the rose garden in the inner courtyard is simply exquisite. 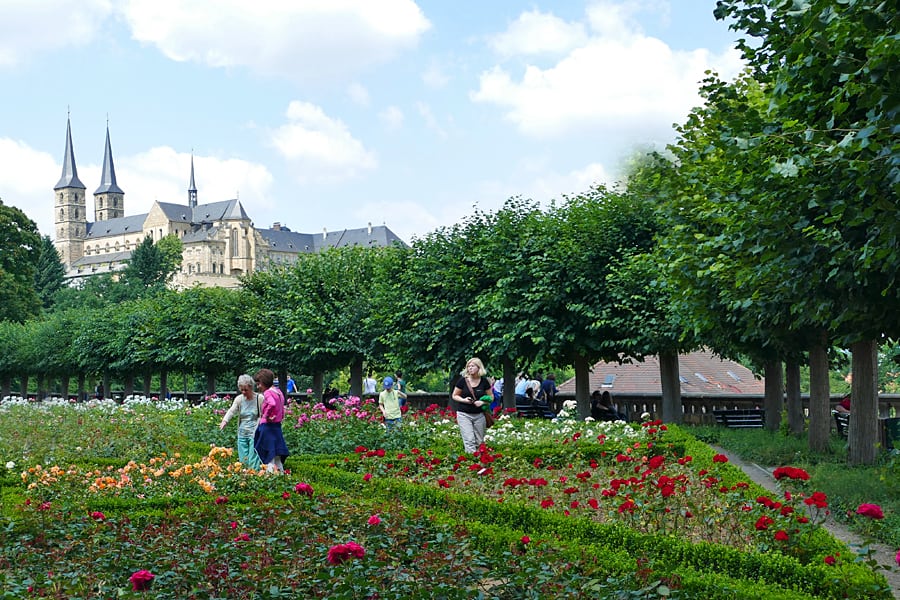 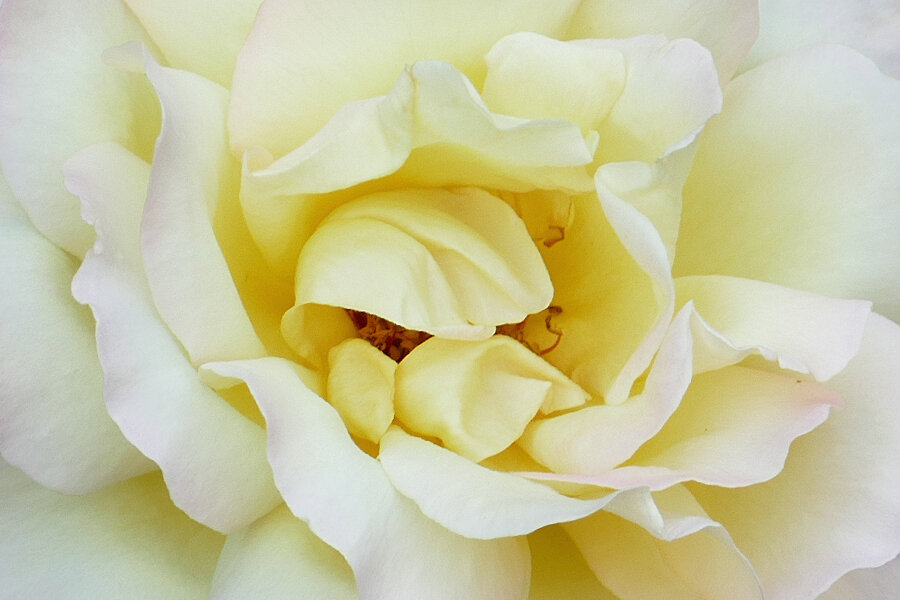 Photography tip: You’ll find a lovely view across the rooftops of Bamberg from the Rose Garden. 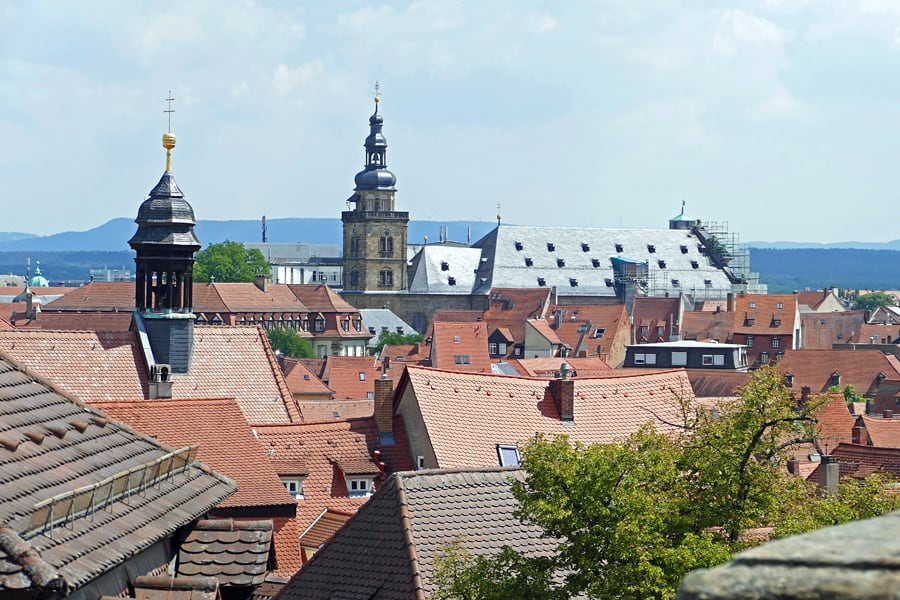 From the Rose Garden I made my way back towards the river as I wanted to photograph the row of half-timbered houses affectionately known as Little Venice. It’s one of the most picturesque riversides I’ve ever seen. In the former fisherman’s district these quaint houses, dating back to the Middle Ages, are squeezed together along the river bank with boats tied up at the moorings by tiny but very pretty front gardens.

Photography tip: The best vantage point from where to photograph Little Venice is along Am Leinritt on the opposite bank of the river. 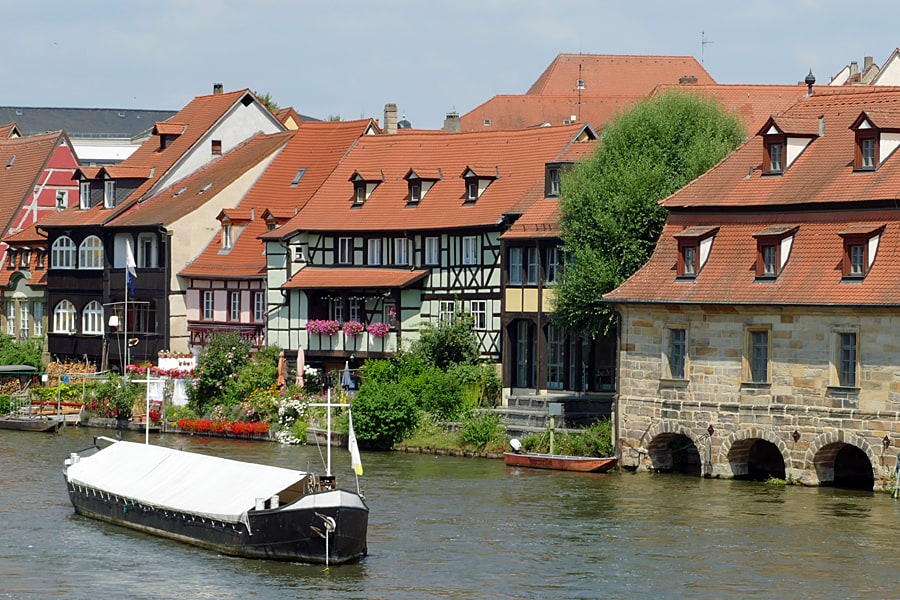 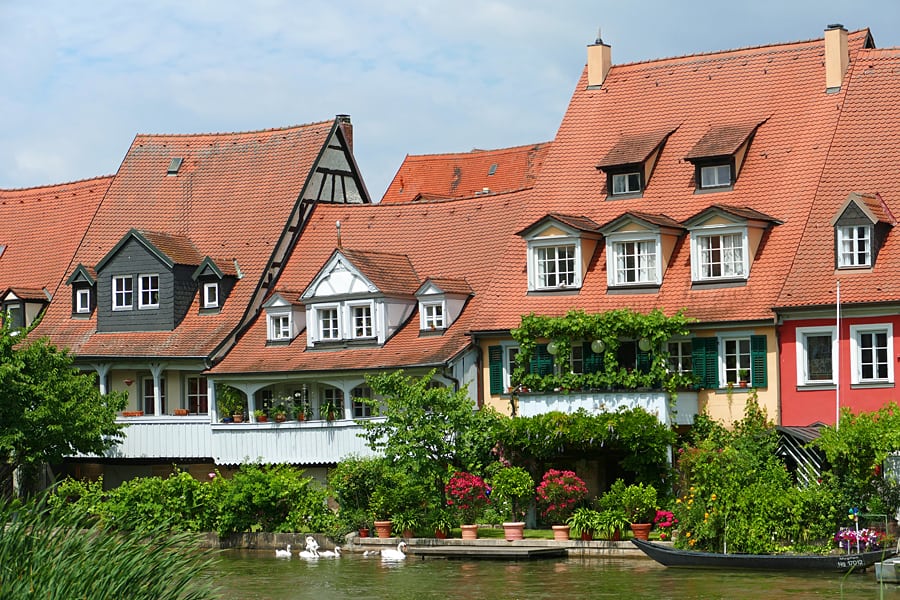 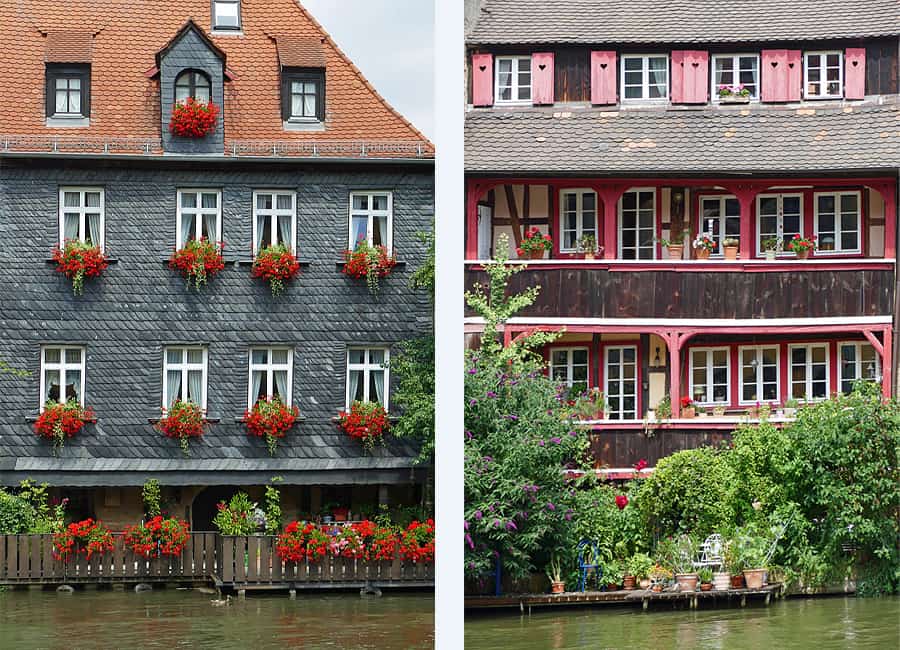 As I sip the last of the Aecht Schlenkerla Rauchbier, I remember how I was told with a wry smile “Its an acquired taste, after the third or fourth you’ll start to love it.” I loved it immediately as I did Bamberg. A beer that tastes of smoky bacon from a town full of so many picturesque and fascinating buildings – what’s not to love? Cheers! 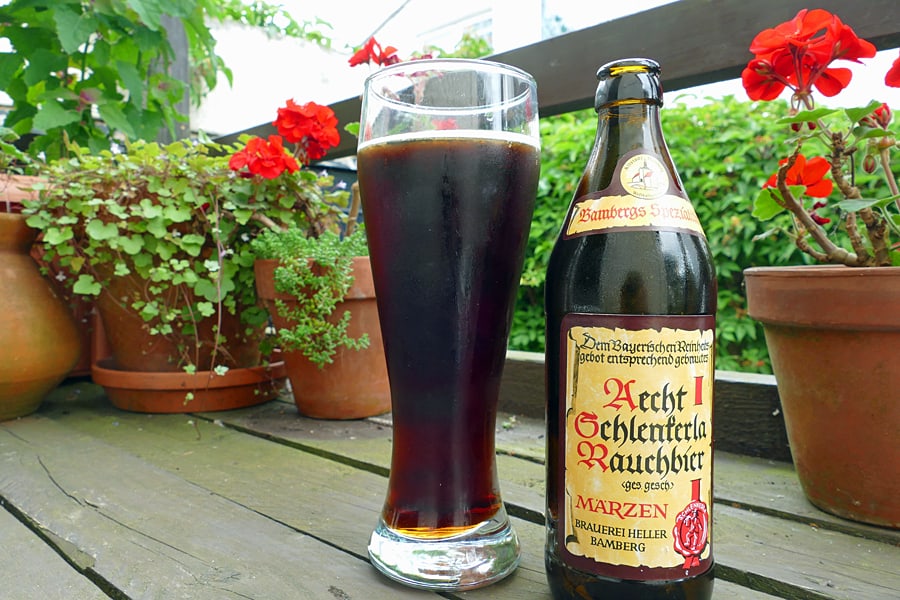 This article is now available to download for free on GPSmyCity. It can also be upgraded to include an offline map and GPS guided travel routes. Follow this link on your mobile or android device to find out more, Walking Tours in Bamberg. 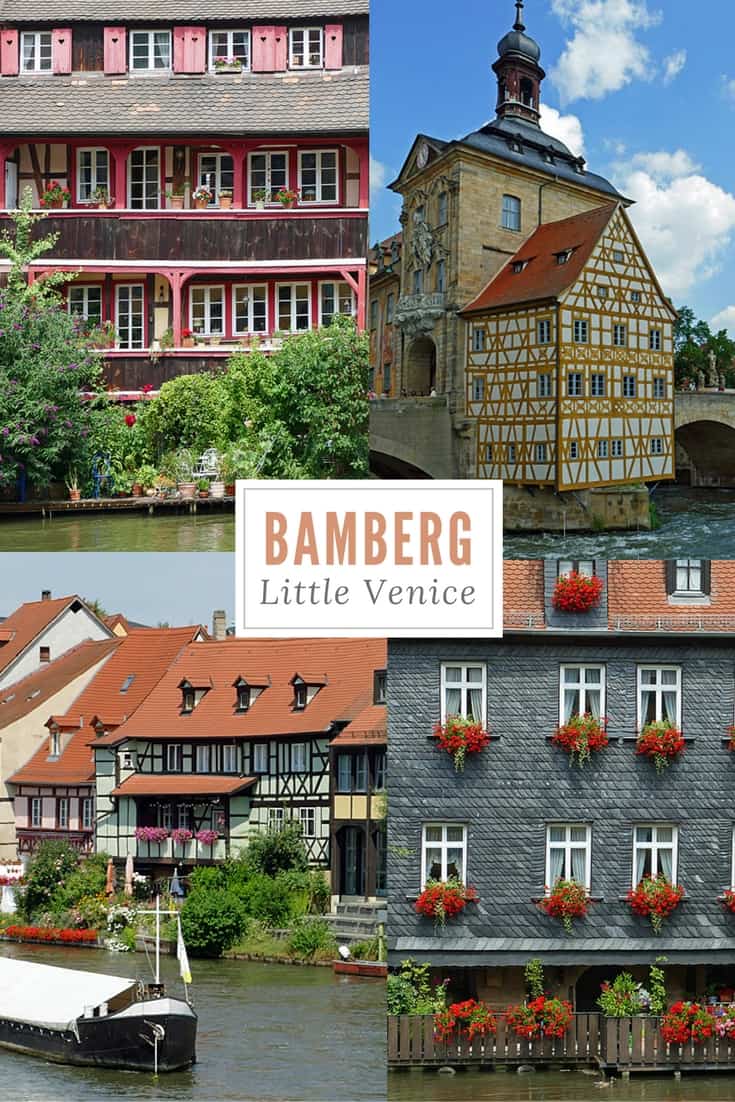 Disclosure: I travelled to Bamberg on holiday with my Mum and sister with Riviera Travel. They looked after us very well and I am more than happy to recommend them. Thanks too to Blacklane for our complimentary ride home in style.

Where and What to Eat and Drink on St Kitts

The flavours of the Caribbean… coconut, spices, rum, sumptuous fresh fish and seafood… my guide to finding the best food...