In the Footsteps of the Samurai: Walking the Nakasendo Way

As I stride along the narrow path, tall cedar trees tower above me. All I can hear is the gurgling stream, birds twittering and the breeze rustling in the treetops. The large cobbles I tread upon have been worn down over the centuries by the footsteps of thousands of travellers. Now, there is barely a soul in sight but this trail would have once been teeming with people – commoners walked, nobles were carried in enclosed norimons, while samurai travelled on horseback. I’m hiking in Japan along a stretch of the Nakasendo Way, a 332-mile route linking Kyoto with Edo (now Tokyo) through the Kiso Mountains in central Japan. It is one of five roads used during the Edo period (1603 to 1868) when the emperor in Kyoto no longer held power over the country, having been usurped by the military, headed by the most senior samurai, the shogun in Edo.

above: A nobleman being carried in a norimon along the Nakasendo

Today, much of the route is through urban sprawl, with yellow and white stones set in the tarmac to mark the Nakasendo road. But some sections have remained much as they always were and a few of the 69 towns along the route, known as post stations, where travellers rested each night, remain resilient to the Japanese tendency to tear down the old and build anew. Arguably the prettiest section of the route runs through the Kiso Valley. In spring the valley is decorated with cherry blossoms and in autumn the golden foliage of Japanese maples.

The Nakasendo Way – Pin it for later

Visiting Japan for the first time? Check out my post, 33 top travel tips for first-time visitors to Japan.

Earlier that day our walk began in Nakatsugawa, post station 45, in the Gifu Prefecture. It’s a chilly, crisp morning with a clear blue sky. A warming glass of sake (Japanese rice wine) in a 200-year-old brewery is an excellent way to start the day. As we leave, the shop our guide points out the sugidama, a large ball made from cedar foliage that was hung outside the shop when the sake was brewed. As it ages, the green leaves will turn brown giving an indication of the age of the sake. The brewery is housed in one of a number of old buildings that have been restored along this road, including the town’s honjin, a lodging house for feudal lords and the waki-honjin, for lesser dignitaries.

above and below: Sake brewery in a preserved building along the Nakasendo way in Nakatsugawa

From Nakatsugawa we head to Ochiai, post station 44. It is here, just as you leave Ochiai on the way to Magome, that you’ll find the best-preserved section of the stone paving that once covered the entire route. The path leads through a cedar forest with both original and restored ishu-datami, which translates as stone tatami (the matting used in traditional buildings).

Thanks to its remoteness in the Kiso Valley, this section of the trail is the most intact. The post towns of Magome and Tsumago are particularly known for their preserved wooden and plaster buildings from the feudal era. Over forty years ago they pedestrianised their main streets, restored many of the old buildings and, where they could, hid the power lines.

I didn’t get the chance to visit Tsumago itself, which is a great shame as it is said to be the most authentic of the two, but Magome was a joy to explore.

We stopped for lunch at Juri, a small Japanese restaurant just outside of Magome on the road to Tsumago, and tucked into sticky chestnut rice with various little dishes, of which the pumpkin sasami was particularly delicious, accompanied by miso soup and green tea. 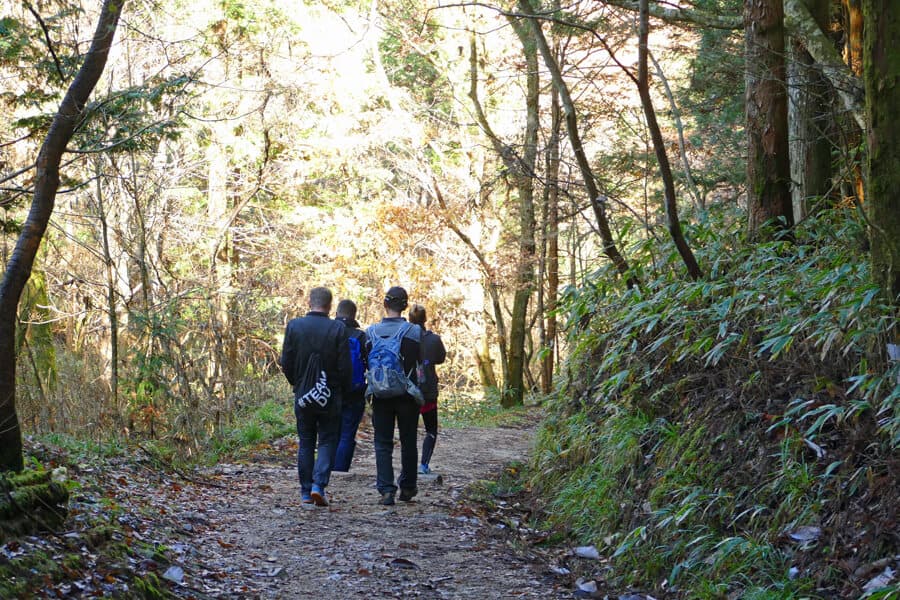 below: Further down the trail another cup of green tea awaited us at a traditional tea shop on the route between Magome and Tsumago. The tea is free, just leave a small donation.

Check current prices and availability for hotels in and around Gifu on Booking.com

In the footsteps of princesses

The Nakasendo road through the Kiso Mountains was one of two routes leading from Kyoto to Edo, the other being the Tokaido coastal route. Although the latter was a little shorter and less arduous than the colder mountainous trail, some preferred the Nakasendo which was considered less dangerous as it avoided crossing any large rivers. It was the preferred route by noblewomen, most notably brides heading to Edo to get married, who also wanted to avoid a section of the Tokaido considered inauspicious for weddings. One such bride, Kazunomiya, the younger sister of the emperor (and the current emperor’s great-great-aunt) was sent to Edo in 1861, aged 16, to marry the 14th shogun. Tens of thousands of attendants accompanied her (possibly as many as 30,000). It is said that the procession was over 30 miles long and took 4 days to leave Kyoto. It strained the resources of the post towns beyond breaking point. How different the now-tranquil trail through the forest is today.

The Sixty-nine Stations of the Kiso Kaido

The Sixty-nine Stations of the Kiso Kaido is a series of 19th Century ukiyo-e (woodblock prints) created by Utagawa Hiroshige and Keisai Eisen, one for each of the post towns along the Nakasendo Way (originally called the Kiso Kaido). Below is one of my favourite prints from the series, post station 46. Oi, Ena, Gifu Prefecture. You can see the whole series in the map below by clicking on each town in turn.

You might also enjoy: Gujo-Hachiman, Japan’s Water City and the Castle in the Sky

How to get to Nakatsugawa

Nakatsugawa is just 50 minutes by Shinano express train from Nagoya Station or 80 minutes by rapid train.

How long does it take to walk?

I stayed in an onsen (hot spring) ryokan (traditional inn) Iwasu-so near Nakatsugawa. While the décor is rather dated, it has a wonderful outside communal onsen as well as private onsen baths and is in a lovely rural setting. It has the traditional tatami-matted rooms and simple futon mattresses as beds. While they didn’t look comfortable, I was pleasantly surprised by how well I slept. I was also surprised that I found stripping naked in front of strangers (women only) to enter the hot spring communal bath was nowhere near as embarrassing as I expected it to be. The hot springs are a great antidote to tired limbs and jetlag.

Check current prices and availability for hotels in and around Gifu on Booking.com

This article in the Guardian, The inns and outs of my walk into Japan’s past, recommends staying in a traditional minshuku, a simple, traditional family-run guest house, and they do sound very appealing.

Disclosure: My visit to Japan was organised by Central Japan Tourism in collaboration with the prefectures of Gifu, and Aichi and JTB Europe Ltd. My visit was complimentary but, as always, I keep the right to share with you whatever I like here on Travel With Kat.