Always a warm welcome in The Gambia 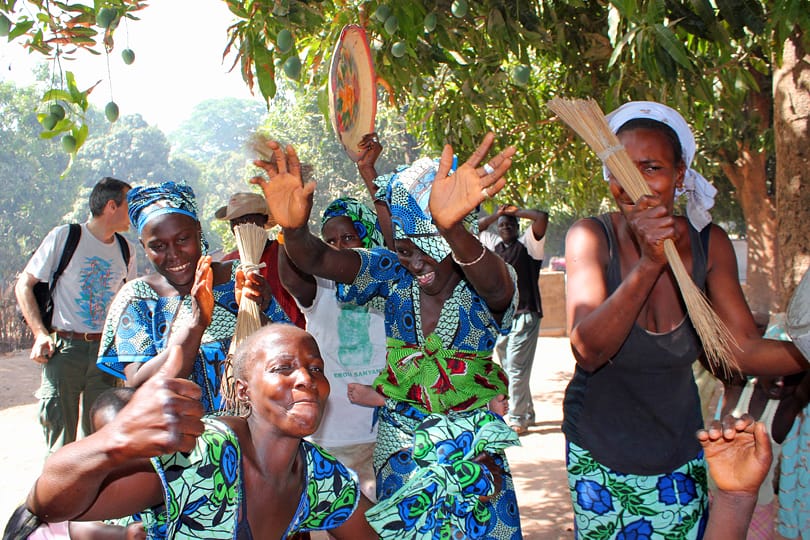 In the very early hours last Friday morning my alarm went off. Finally the day had arrived and it was time to start the journey that I had been looking forward to for months. Seven of us were heading off to The Gambia for a few full-on days of exploration, adventure and fun. 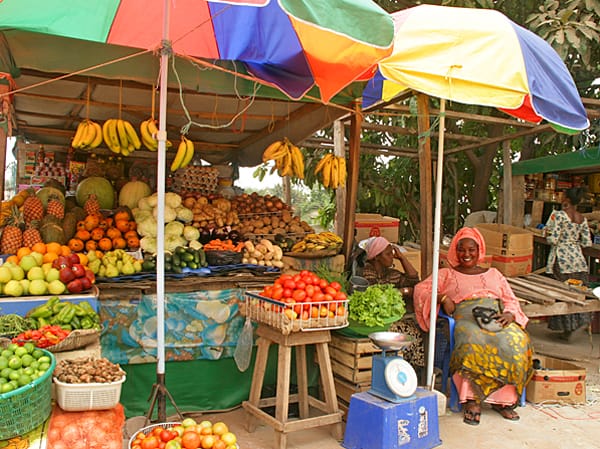 One of the many colourful fruit stalls you’ll pass when you arrive in The Gambia.

Throughout the last few weeks everyone on the trip was getting more and more excited. Jai, from Savoir There, was caught humming Shakira’s ‘This Time For Africa’ and confessed as much on Twitter. Monica, The Travel Hack, was so excited she thought she might explode! Posts, tweets and re-tweets were bouncing around the twit-o-sphere sharing the excitement with the hashtag #BlogGambia. That’s before we even got here.

Jayne, 40 Before 30, wasn’t sure what to expect but was equally looking forward to finding out more about this tiny West African country, that is not much more than a sliver that cuts Senegal almost in half.

Simon, from Wild About Travel, admitted she had never thought of travelling to The Gambia, simply because she knew virtually nothing about it. In fact, for most of the travel bloggers in the group, it seemed completely off the radar which added to their excitement. As they began researching the destination their enthusiasm grew and grew.

And although I’ve been to The Gambia many times before, having worked for The Gambia Experience (the sponsors of this trip) since 2005, I was just as excited as everyone else.

It may be the smallest country on mainland Africa but it has a big, big heart, the friendliest people you could hope to meet anywhere and is known as The Smiling Coast of Africa with good reason. 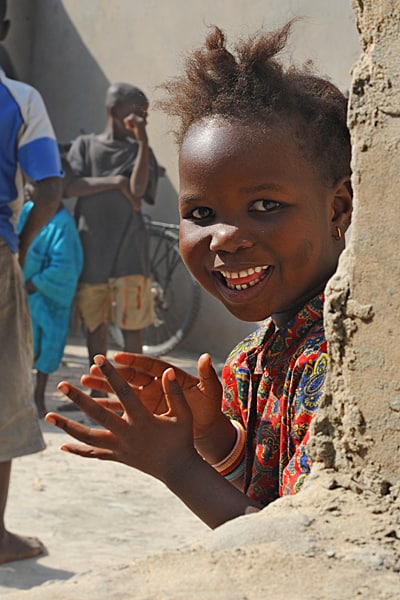 A former British colony, the official language is English, although most people grow up speaking one of a number of tribal languages. English, however, is taught in all the schools from a young age so while the older generation may not speak it, most youngsters do and every one you are likely to meet in the tourist area will speak excellent English (and probably quite a few other languages too, both African and European).

Most Gambians are Muslim, belonging to one of seven main tribal groups, with a small proportion being Christian. Living happily side by side, it is common for tribes and even the two religions to intermarry and in my experience, most people are happy to use any excuse for a celebration whether it be a Muslim or Christian festival. There is also still a strong believe in the ancient traditional customs. 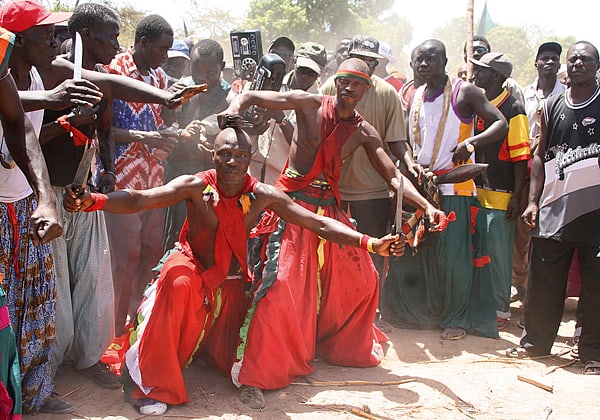 I had an amazing day at this Jola festival back in 2007 where the marabout used holy water to protect these men from the sharp blades they struck themselves with.

The Gambia is a great winter sun destination with sunshine and high temperatures virtually guaranteed from November right through to June. The tourist area hugs the Atlantic coast and the sandy beaches are wide and never overcrowded. In the quieter ‘green’ season, while still hot, short sharp bursts of rain bring the vegetation and flowering trees to life. It’s in the same time zone as the UK, less than six hours away from Gatwick, great value for money (am I sounding like a sales brochure?) and with it being English speaking, it is perfect for us Brits. 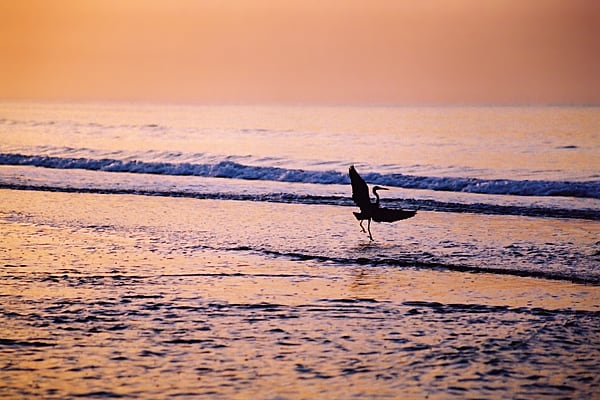 Sunset on Kotu beach in The Gambia

While there is no big game in The Gambia there is still an abundance of wildlife to enjoy, in particular over 560 species of birds.

Although one of the most politically stable countries in Africa it is also one of the poorest and during our stay we visited a number of projects addressing a variety of issues. The Gambia Experience is celebrating 25 years in The Gambia and have recently donated £25,000 worth of flight seats and £25,000 in funds, to charitable projects operating in The Gambia. I was really looking forward to seeing first-hand how some of this money has been spent.

Back to the day of our departure, my taxi arrived on time and whisked me off to the airport where I met up with Iain from Mallory on Travel. All going well so far.

A text from Tom (from the Bald Hiker) warns me that the Gatwick Express isn’t running; he’s going to be late. I text Jayne – instead of coming by train as planned, she’s stuck in heavy traffic with Jai. They are going to be late. Ditto Monica and Simon, who, although they didn’t know each other, quite by chance, jumped into the same taxi and are edging their way through London’s rush hour traffic.

A fire at Three Bridges railway station is the culprit. Trains between London and Gatwick are cancelled. I sit with Iain in Gatwick’s No 1 lounge, munching on a delicious (and complimentary) pan aux chocolate, with my fingers crossed, praying that they make it on time. Simon, Tom, Jayne and Jai in various queues of traffic, are praying that things start moving. I’ve worked so hard to organise this trip, from finding the right bloggers to making sure that everyone has the chance to do the things that really interest them with enough variety so that we aren’t all writing about all the same things.

The possibility that, instead of there being seven bloggers on the trip including me, there would just be two, was something I couldn’t bear to consider. As the deadline for check-in draws nearer I am resigned to the fact that there is absolutely nothing I, nor anyone else, can do. I remain surprisingly calm.

Time ticks away. A text from Monica, she thinks they’ll make. Time ticks away. A text from Jayne, she doesn’t think they’ll make it. There are just minutes until the deadline when to my relief Monica lets me know that she and Simon are checked-in and on their way. I am SO relieved that it’s clear that I was not quite as relaxed as I had thought. And then to my joy, I also hear that Tom has made it too.

By now check-in is well and truly closed and there is still no word from Jayne and Jai. We reluctantly head to the departure gate where Iain and I meet up with the others. It’s really great to finally be able to put faces to names but we are all gutted that Jayne and Jai are now at the airport but too late to check-in. They were so excited about the trip that I dread to think about how they are feeling, not just their own disappointment but also the feeling that they have let people down. They haven’t. Sometimes fate plays us an unexpected hand.

An apparent disaster transforms into a wonderful surprise

As our plane takes to the air I am sure that The Gambia Experience will be happy to arrange another trip for Jayne and Jai and that this is not a cancellation for them just a delay but it never occurred to me that while we were cruising at 36,000 feet that a plan B is already being formulated.

Nearly six hours later as we get off the plane in Banjul and pass through immigration, I find out that new tickets for Jayne and Jai are already in the post and a new itinerary is in place. What is more, that as well as staying at the beautiful boutique hotel Ngala Lodge, their trip has now been extended; they will also be staying at the unique Mandina Lodges in Makasutu Forest. So instead of a long weekend in The Gambia, they are now enjoying a full week there. 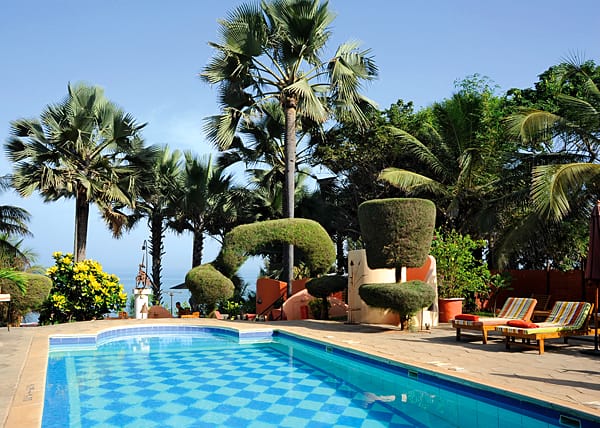 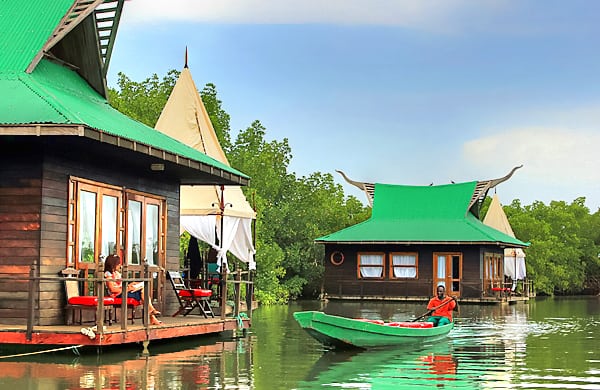 As always we received the warmest of welcomes when we arrive in The Gambia.

We have had the most amazing time, met so many wonderful people and have had some truly memorable experiences.

I am eager to share these with you but I am also looking forward to following first Jayne, Jai and Iain (who has stayed on an extra week), followed by Sarah and Terry from Live, Share, Travel as they continue ‘Blog Gambia’ over the coming weeks. The twit-o-sphere is buzzing with #BlogGambia tweets and photographs but there is SO much more to come including: a spectacular Kumpo in Kanuma, the sights, sounds and smells of Tanji fish market, a school in need of sponsors, a birthing clinic in want of an ambulance and a very expensive camera in the river, as all the bloggers take the people of The Gambia to their hearts.

While my African adventure draws to a close, for others theirs is just beginning. Mind you, a big part of my love of travel is sharing it here with you so I hope you will enjoy my coming posts. First stop Kanuma.

Disclosure: Although I have worked for The Gambia Experience, the sponsor of this trip, since 2005, I will always give you a completely honest opinion throughout my #BlogGambia posts, just as I would any other sponsored trip or review. My only bias, which I hope you will forgive me for, stems from my having fallen in love with The Gambia many years ago.