Gujo-Hachiman, Japan’s Water City and the Castle in the Sky

As I gaze across the valley all but the distant hilltops is hidden beneath a blanket of white clouds. I’m with a group of Japanese photographers who have been here since the early hours, patiently waiting to capture a rare sight. Every one of us is willing the clouds to part. It is now about 9 in the morning and I have only been here a few minutes when the mists slowly melt away, revealing the white fort. I can’t believe my luck. For a few moments, Hachiman Castle appears to be hovering in the clouds before disappearing once again into the mists. It is a phenomenon that has given it the nickname ‘the Castle in the Sky’.

Hachiman Castle, the Castle in the Sky

Surrounded by Japanese maple trees, the white castle looks magnificent against the clear blue autumn sky. Some of the trees have already lost their leaves, but those that remain are a glorious red. And, now that the cloud has cleared, the views from the castle looking down on the town of Gujo-Hachiman are fabulous.

The castle was built in 1559 by the region’s feudal lord, a samurai who ruled over the region answering only to the shogun, the head of the samurai and ruler of Japan. The late 19th century saw the demise of the Tokugawa shogunate and the end of military rule, as power returned to the emperor in Kyoto. Seen as symbols of the shogunate many castles, including this one, were destroyed. What we see today is a reconstruction built in 1933, but it is no less beautiful and well worth seeing.

Take this article with, you including the GPS locations of all the key sights, with the GPSMyCity App.

Down in the valley we wander along ancient streets, enjoying the historic buildings and the views from the bridges over the river. The town is known as the Water City, thanks to its many crystal-clear waterways, fountains and canals. If you visit in the summer, don’t forget your swimsuit.

Next to the Sogi-Sui Shrine, where a natural spring is the source of the town’s water, we found a fabulous café serving the most beautifully presented matcha ice cream – layers of roasted tea jelly, green tea pudding, rich matcha ice cream, red bean paste and sticky rice flour dumplings topped off with thick cream. And it was superb! If you want to try it, you’ll see the café marked on a map at the end of this article together with tips about visiting and getting to Gujo-Hachiman.

As well as its stunning castle (and match ice cream), Gujo-Hachiman is famous for two things; the Bon Odori festival and fake food.

The Obon, or simply Bon festival in Japan dates back some 400 years and is celebrated at slightly different times of the year throughout the country. It is a time when people remember and honour their ancestors. One of the most famous is held in Gujo-Hachiman in the Gifu Prefecture of central Japan, where the festival runs throughout the whole of August. Each night Bon Odori (odori meaning dance) is held in a different location and can carry on until the early hours. With a band in the middle, people perform 10 set dances – a kind of Japanese line dance.

The reason why it is celebrated in Gujo-Hachiman with such passion dates back many years to the time of the shoguns. Each year the feudal lord would calculate how much tax was required from the people, based on how much rice had been produced. One lord grossly exaggerated the rice production and demanded such high taxes that the people were starving. A petition was sent to the shogun complaining about the unjust tax but time and time again it was intercepted by the feudal lord, and the resident whose name appeared first on the petition was assumed to be the leader and beheaded. After a number of attempts, the people signed their names in a circle so that the leader could not be pinpointed. Their plea was eventually heard, the lying feudal lord was sent away and another selected. To unite the people the new feudal lord declared that every year all the people, no matter what their status or class, should dance together, something previously unheard of. Today the dancing continues, where locals and visitors alike dance to celebrate Bon Odori in memory of their ancestors. 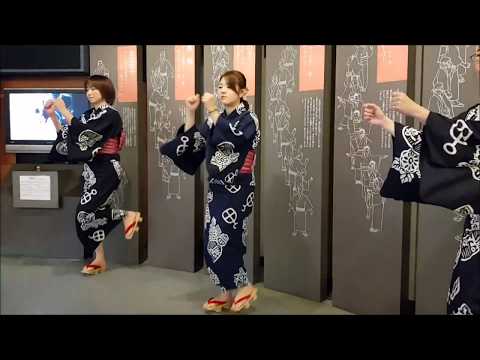 At the local museum, Gujo-Hachiman Hakurankan, we are treated to a display of some of the dances, but I’d love to return for the festival itself. The steps are easy to pick up, I’m told. Luckily our attempts weren’t caught on camera!

Have you ever walked by a Japanese restaurant and seen tempting plates of colourful food on display in the windows? If you were to take a bite you’d be sorely disappointed as it is most probably made out of wax. Known as sampuru, the production of replica food is big business in Japan.

While mass-produced items are available, by far the most convincing are made by hand and the leading location for this is Gujo-Hachiman, where the tradition dates back many decades. Here you’ll find a number of workshops, some of which offer classes, making a wide variety of replicas, from sushi and tempura to hamburgers and pints of lager. 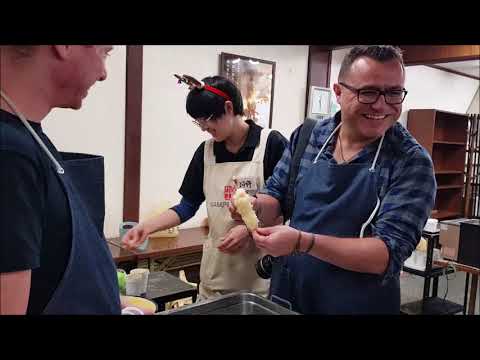 We visited the replica workshop, Sample Kobo, where we had a hands-on experience making a lettuce and a couple of items of tempura by carefully pouring hot wax into cold water and shaping it as it cooled. It was fascinating to see how these lifelike replicas are made and great fun to try ourselves. They are so convincing and so skilfully and painstakingly made by hand.

Gujo-Hachiman is relatively small, and the main sights are reachable on foot.

There is no public transport from the town to the castle, but it is only a short taxi ride from the town centre or a 20-minute walk. The walking trail to Hachiman Castle starts opposite the Gujo Hachiman Tourist Office (see map below).

There are various trains and buses serving the area from Nagoya which is less than two hours away. Gujo-Hachiman railway station is a little out of town as are the main bus stops, Gujo-Hachiman Inter bus stop and Shimo-Osakicho bus stop. You can find more details on the website, Japan Guide.

The oldest replica workshop is the Sample Village Iwasaki between the town centre and the railway station, but there are a number of workshops that are more centrally located including Sample Kobo, where classes are available.

Where to eat in Gujo-Hachiman

We stopped for lunch at Soba no Hirajin (see map below), which is very centrally located and has a traditional atmosphere and good food.

above: Special hida beef with soba noodles, a traditional dish of the area, at Soba no Hirajin

Yoshidaya Minokin (see map below), I’m told, is the place to head if you like unagi (eel served on a bed of rice) and trust me, it is delicious. Although I’ve not tried it here, I would skip the eel soup.

Don’t forget the matcha ice cream next door to the Sogi-Sui shrine.

Where to stay in and around Gujo-Hachiman

Check out reviews and find the best prices for hotels and ryokan in Gujo-Hachiman.

Take this article with, you including the GPS locations of all the key sights, with the GPSMyCity App.

Disclosure: My visit to Japan was organised by Central Japan Tourism in collaboration with the prefectures of Gifu, and Aichi and JTB Europe Ltd. My visit was complimentary but, as always, I keep the right to share with you whatever I like here on Travel With Kat.